Trending
You are at:Home»Stories»“The Trouble With Ingress”
By Nikolas on November 11, 2013 Stories

Ingress has meant so many things to so many people, including myself.  I’ve personally met so many great people that I never would have if it weren’t for the dedication of the Niantic Team.  I’ve traveled places in my area that I didn’t even know existed.  The Niantic Team does a great job of hosting their Anomalies and I encourage you to try and attend if at all possible

But, what about the other side of Ingress?  It’s come time to really dig deep and decode this question.   There are many issues that could be discussed, I will highlight a few that are hot topics at the moment.

The simple answer seems obvious. Ingress is an augmented reality game that forces you into the real world to discover “portals” comprised of local landmarks, monuments, churches, etc.  If you look closely you’ll even find such portals as Stop Signs, Squirrels, discarded Yellow-Pages under bridges, man-holes in backyards, and statues in front yards 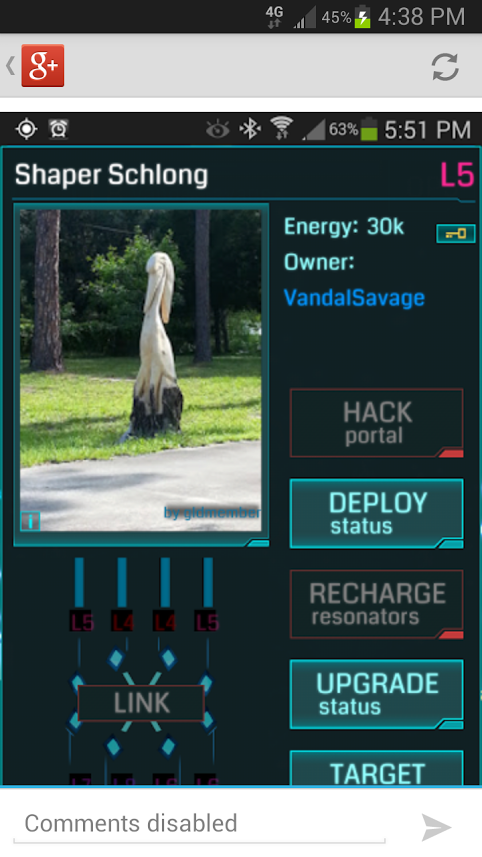 Dig a bit deeper and you will know that Ingress is a Proof of Concept as stated by Brandon Badger himself.

“I don’t think that we could have been successful if we had just announced a platform for this kind of game without building a proof-of-concept game and showing that it could have an enthusiastic fan base. I think it was key to build a proof of concept with Ingress, and so we’re going to keep developing that and push the boundaries of this type of genre of game. But then, that can be something that people can sort of model other games off of and hopefully build interest, so that people can then use the platform.” While I’m sure that most agents will digest that information and accept it at face value, the fact of the matter is that we need to dig just a little bit deeper. There are other thoughts that are mostly true, Niantic Labs is using us to gather global landmark data, in similar ways that we were used as the toll-free GOOG-411 supposedly number that was used for Google’s development in their Voice Recognition software currently found in Android phones. Quite a smart move if I do say so myself.  GPS and behavioral movements are being tracked as well through the data collected while the app is running.  Albeit, this data is surely skewed due to the fact that agents normal driving routines are now varied from their norm due to the need to travel to “just one more portal”. The idea of advertising has also been explored. We look at Hint Water, PopChips, Verizon, Motorola, Zipcar, Duane Reade, Jawbone, etc.

Ingress even alluded to an Ingress tie in with the Jawbone Up that sent many users to websites and stores to purchase the device only to find out later that…it was all for nothing.

In the future, it will not surprise me to find in-game advertisements or additional AP to visit certain locations.

Peeling back the curtain reveals that Ingress is truly a Social Experiment, and one of the biggest ever.  Two factions are pitted against each other and the agents sometimes take sides not just in the game but in heated conversations outside of the scanner technology itself.  More recently however, attention has turned from being faction based arguments to the combined forces of all agents upset with the game makers themselves.

We’ve seen smaller changes such as the range of XMP bursts to the costs of deploying resonators.  We’ve seen changes that upset a majority of the user base in the case of mod deployment.  In this case we went to bed with the option of only deploying 1 mod and woke up to a partial retraction of 2 mods (Coming from 4 the previous day with the option to remove)

Ingress hands us an unusable Intel map, with no open API, and yet they continually attempt to shut down the only true working map.  In no way are we condoning the use of 3rd party applications, but instead we are asking for a 1st party application that works. Harassment happens on both sides and while no legal action is expected it would make sense to shut these accounts down so as not to lose your good players.  Instead a reply is automated stating to report to local authorities. After the 3rd, 4th, 5th separate  incident involving the same players on either side you would think there might be a problem.  Surely a company all about data collection would have records on this.  At the VERY least allow the harassed agents a name change when there is clear evidence.

Finally, we have dealt with GPS spoofers. This began just shortly after the game was brought online.  It is perhaps the one thing that Ingress users have asked to be addressed time and time again.  Ingress has been able to successful track GPS spoofers for several months thanks to an algorithm that compares the satellites you are using versus the location shown on the scanner. Now that we know they are capable of actually seeing who is spoofing, it begs the question, why aren’t they doing anything about it?  What kind of social experiment are we dealing with?  Do they want to see how we react to the spoofers? Maybe how we react to the lack of transparency?

While I am sure they have their reasons, the lack of transparency is disturbing and upsetting.  The spoofers are  ruining the hard work of those agents who spend time and money for the “experiment” and it doesn’t appear that Niantic cares.  While I’m sure they do care; Perception is Reality, and this is what the agents see, or rather, don’t see. What we have seen is some good agents suspended for false reports while many who ruin the game continue to play on.  When will it end? When will your users not feel left out of what they help you make? The player base has frequently said Ingress is more than a game, it’s a life style.  To  have such a blatant problem with such a dedicated player base hurts on many levels. All we (agents) are asking for is a little transparency. We don’t expect to know all your plans or secrets, just tell us you are doing SOMETHING….

“The Trouble With Ingress”

by Nikolas time to read: 4 min

Stories Behind the Agent – Joe Philley by Evilwitch…

Stories Behind the Agent Nikolas Moore by EvilWitch
6