Hello! Today we’re going to go through some changes which I feel would tweak and improve the gameplay for agents. Many of us feel there is not much to do after reaching L8. You just do the same things without any direct goal. There are the unofficial levels; L9, 10 and so on but they are just empty achievements. In an interview with Anne Beuttenmüller, she said that, “Niantic is definitely going to introduce missions and will raise the level cap, which is currently at level 8.”

Leaving the level cap increase aside, this article will mainly focus on the Missions which were mentioned in the interview. There are a lot of options of how to implement these missions and how they affect the agent, but I’ll give you my version of how the Mission System could be implemented.

There could be three Mission Categories which then haves different types of Missions to complete. The categories would be the following:
Discovery Quests, Building Quests and Combat Quests.

The Quest categories have three quests each where you can choose to pick one quest or both quests. If you pick only one, the requirement of the quest will be higher and also the payout of items and AGP:  Agent Growth Points are points you can use for upgrading different skills, more about that later.

If you finish one harder quest, you’ll gain 3 AGP. If you finish the 3 easier quests you’ll earn 2 AGP. Initially, you would only be allowed to choose one weekly quest but after gaining enough AP and AGP you would be able to choose more than 2 quest categories per week.

The quests would gives you item rewards related to the quest. So if you have chosen the quest to destroy X number of resonators, the reward will be a certain amount of XMP’s and also a key feature in the Quest system that unlocks new features for you as an agent – something I call AGP,  Agent Growth Points.

The quest requirements would be calculated through previous weekly statistics. So everyone doesnt have the same requirements, but the system adapts to how the region looks. The denser and higher agent activity – the harder quests. This factor could balance the experience for players living in rural areas.

Initially you’ll start with one quest category per week, but you will be able to accept more by unlocking the feature. Here is a little example how the L8 Mission tab would look like. 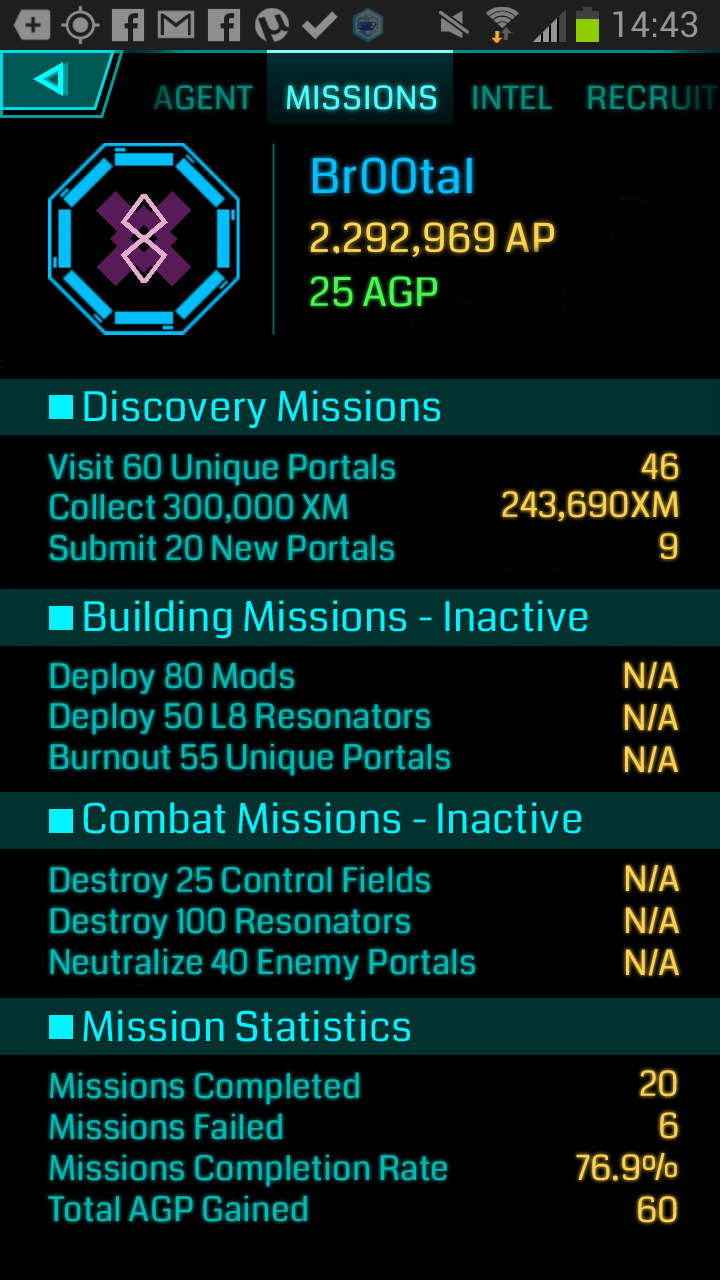 The AGP Upgrades would be segmented in AP Tiers, or as we call them “unofficial levels”.

The current AP tiers are L9-L12 and the unique upgrades are available when you have 9.6m AP = L10.

Now to the list of features you could earn through spending AGP. A few of the upgrades are also connected to how much AP you currently have. 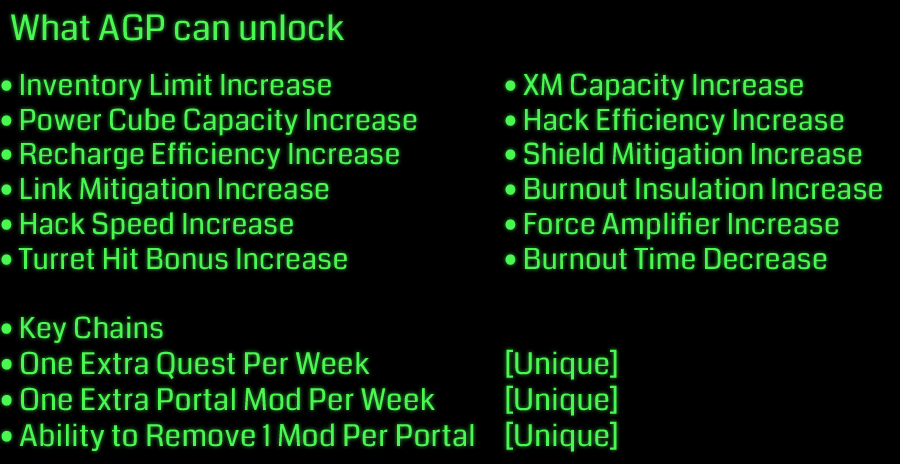 These are just some of the Agent Upgrades I have in mind. The majority of them are enhancing current abilities but some are worth showing some extra attention to.

As far as I know, there is nothing in the game which can affect a portals burnout time. By this, the agent could hack portals faster between burnouts. I am still not sure if this is a worthy upgrade or if i should move this one over to become a portal mod.

The Key Chains are something that I personally don’t need but there are a lot of people requesting this kind of feature. To efficiently stack up keys from different farms or areas, saving space and time finding the correct keys. I felt the agent should have to work for this desired feature rather than have it simply handed to them.

Same goes for the increased inventory limit and  mod removal. The things the devs need to do is to expand the limits of gameplay and make agents work harder for the features they request themselves. The fact that they got what they want will most likely make them work for it too.

The mod removal story was a tad different when the devs announced that they were doing a “test” of changing things a bit and I haven’t heard anything of them reverting the changes. I decided to add this feature so agents can remove one portal mod per player and per portal.

I hope you like what you have been reading so far. In Part 2 I will develop the quest system further, introduce a few new portal mods and some other nice tweaks.

Game Logic On The Internal Economy of Ingress